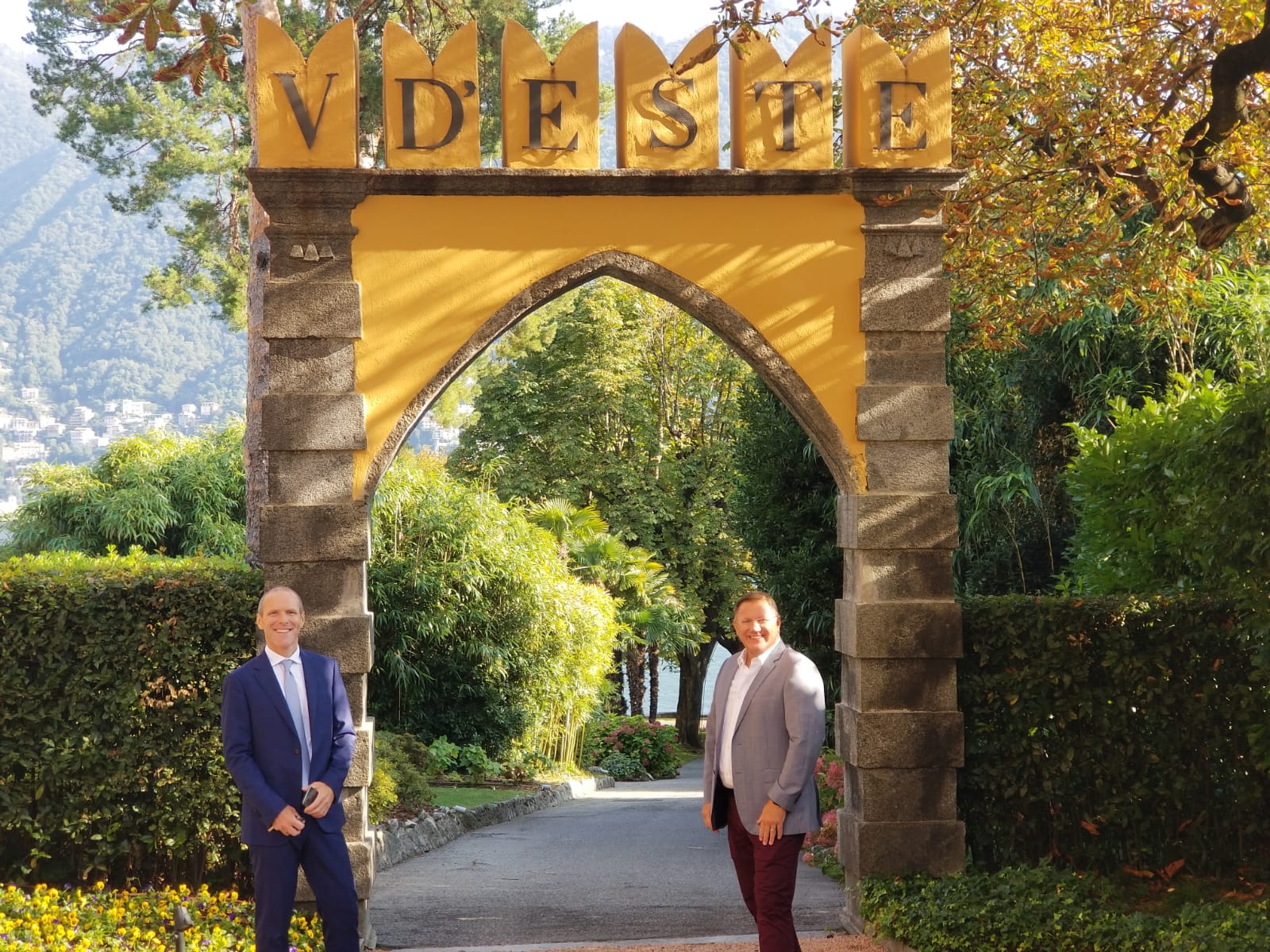 Our Journey Through Italy: Part 3

After more than 3 glorious weeks on the Amalfi Coast, it was time to pack up and start heading north.  Again, this blog/posting this as an informational piece for those who are curios as what it is like to travel, so let me start by telling you….don’t plan ahead if you or your clients are able to travel in Europe at this time.  It is an ever changing puzzle to t understand what countries within the EU are allowing other countries citizens to cross borders.

Originally our plans were to head north in Italy, cross into France to visit our friends at Le Majestic Barriere in Cannes, and then head to Geneva to stay at the Hotel Metropole, visit our friends from Gstaad…all by train, then fly to Copenhagen at the Hotel d’Angleterre.  However, areas of France have now become Covid hotspots, and this would have had to be done by driving into France and back to Italy, with hopes of not having to quarantine again.  Denmark has now closed its borders to several countries, and in part due to its own increasing Covid outbreak.   So, as of 2 days ago, our plan was to continue our journey north only as far as Geneva.  However, we then received news that Switzerland was closing to parts of Europe and other high risk areas, including Italy.  At first, we began to look at changing plans to then fly home from Milan, however, once we were able to speak with our Swiss colleagues, we got the full story.  The report of the closing of borders specified regions of each country, and from Italy only Liguria was included, which we had not visited.  So, my point, it is important to keep up with the daily news from each country, and be flexible!  Do not buy tickets more than 2-3 days ahead of your planned movements, and keep close watch on the “new wave” areas.

We decide rather than driving to take the high-speed train from Salerno to Florence.  The trains are very clean, distancing measures in place, and masks required by all who board.  Safety/Sanitizing kits are handed to all passengers once the train doors are closed, which include a mask, headrest seat cover, packets of sanitizing gel.  Train station in Florence is crowded, and distancing there was really not possible at all times, but everyone is required to wear face coverings.  Bottom line, we did not feel at all exposed or unsafe during this journey.  Our driver was standing at the designated meeting spot and we were swiftly on our way to Villa La Massa!

Again, we traveled by train from Florence to Como, changing trains in Milan.  All was very similar to our first venture, and we felt safe and distanced from the other passengers and the hygiene and safety bags were handed to all.

Our last train adventure, however, was a bit different.  Finally, after tearing ourselves away from Villa d’Este, we were whisked by chauffer from Como to Milano, thanks to the kindness of Danilo Zucchetti and Massimo Dorino.  We boarded a different type of train to head to Geneva.  It was not the high speed like Trenitalia.  Instead this was a regional train.  I would compare the difference from Amtrak Acela to Amtrak regional, perfectly fine.  Why I bring this up is that we were not given the hygiene kits.  I did not walk through the entire train, but the trains overall allow between 50% and 80% capacity.  Also, something touching on the point of inconsistency between counties, there was no food or beverage service car available during the first 1.5 hours of the trip as we were in Italy.  Once we crossed into Switzerland, the restaurant car was allowed to open, and again food was available…. same train. 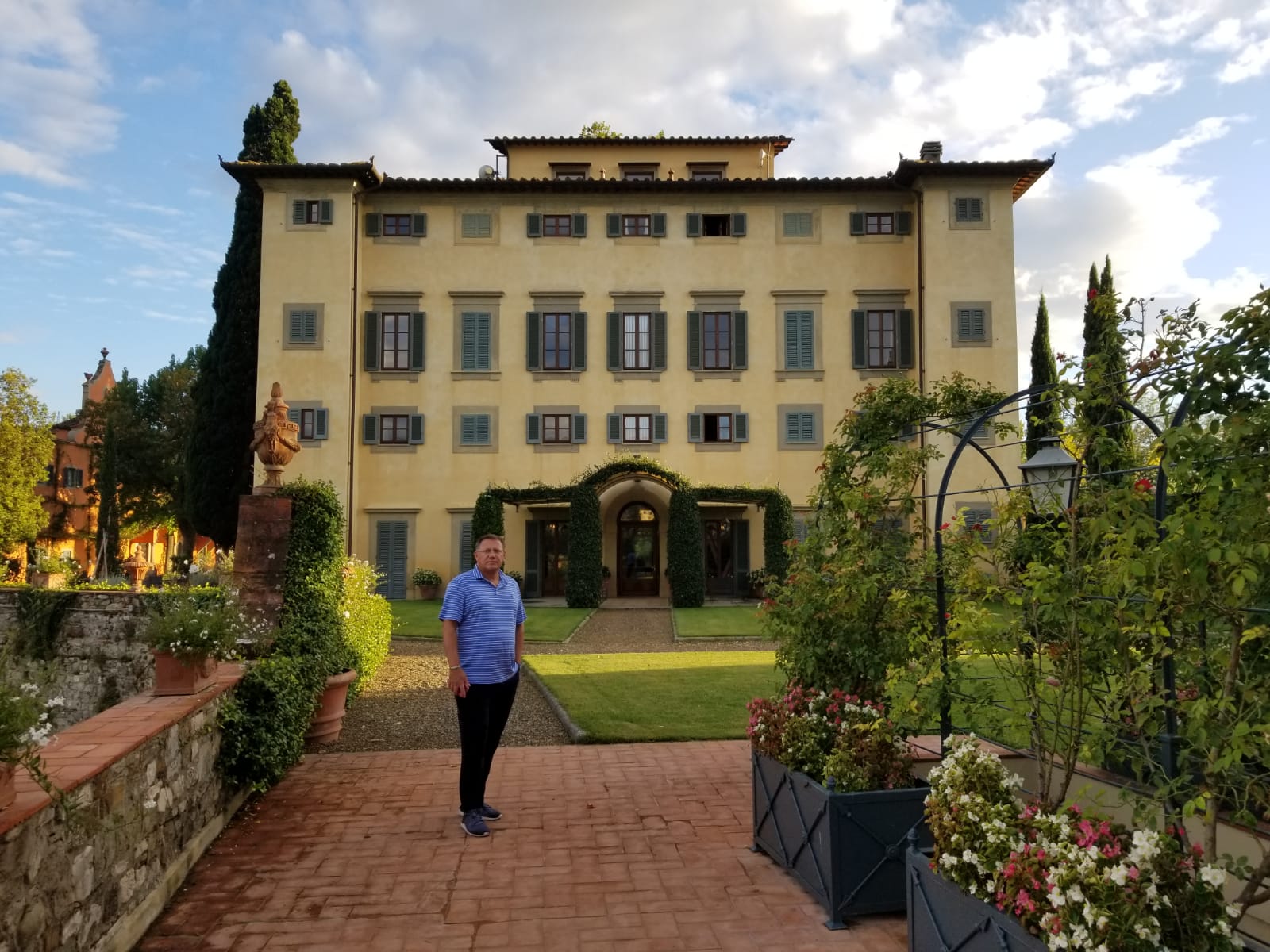 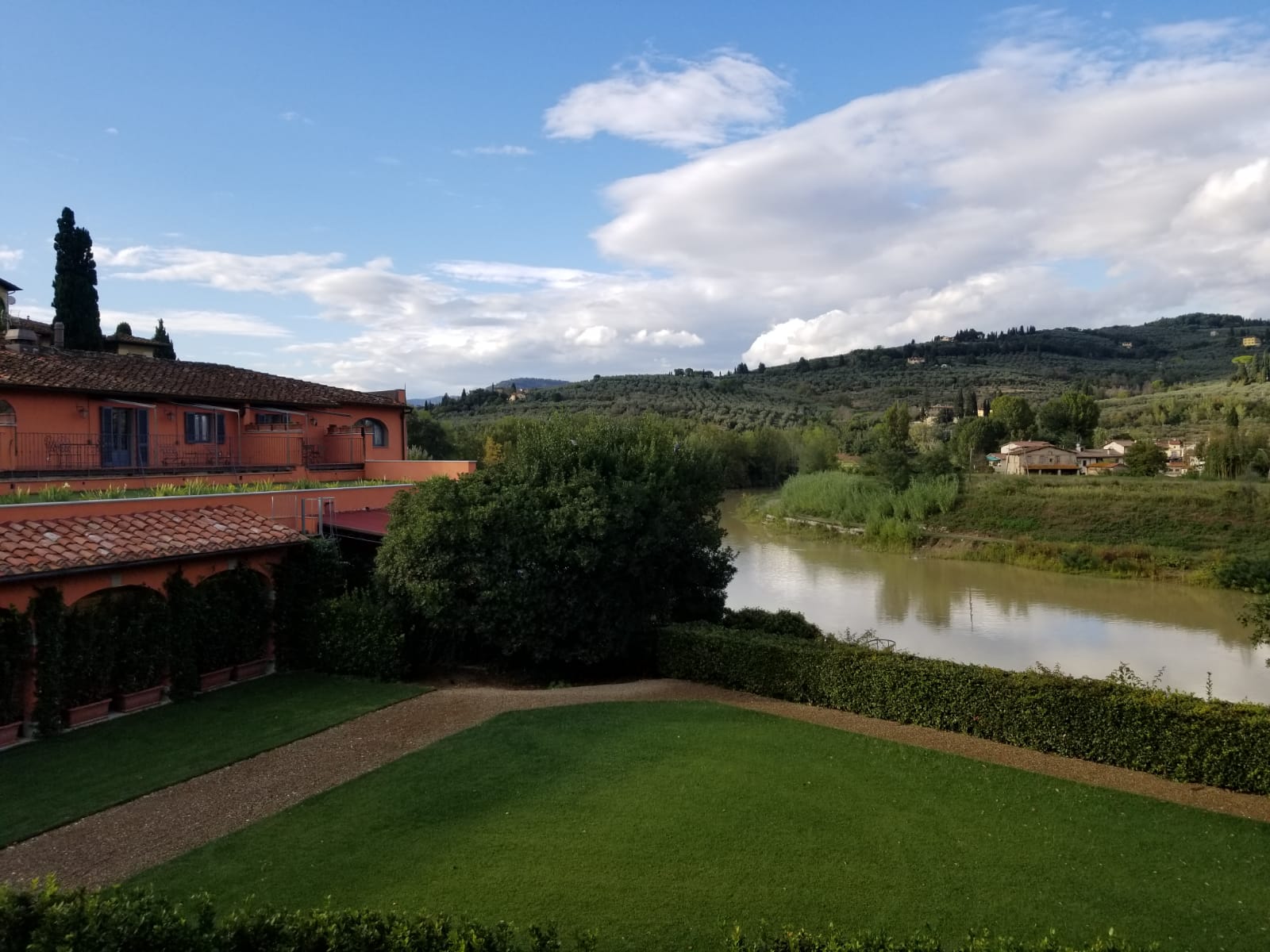 Wow!!  What an impressive difference the newest additions have made to this property, which is now better termed as a Resort. The Villa d’Este Hotels group has invested millions into making this a Tuscan dream on the outskirts of Florence.  The 22 acres space has been dramatically changed by the addition of the new floating edge pool, the new renovation of another farmhouse the “Limonaia” building with its brand new 2 suites and 8 rooms, and the 3 stunning new apartments now available for minimum one week stays in lower seasons, and two weeks in high season.  The area where the original pool was has transformed into a massive outdoor bricked patio, which is great for social distancing of guests at this time.  As you may know, the “main house” or Noble Villas dates back to the 1400’s. This history has been preserved in every corner while each bedroom here offers the feeling of being a VIP guest of a royal Duco or Duchesse!   Although I cannot say I have a favorite building on the 22 acres, I loved the newest additions of the Casa Colonica and the Limonaia (where we stayed).  We dined in the Verrocchio restaurant for breakfast and for dinner, overlooking the Arno.  Two of my favorite dishes are shown here being the lumberjack fish tartare and the spaghetti with porcini mushrooms and shrimp…. amazing!  If you have not yet seen this property, or if you have, but prior to the last year, it is time to return as soon as the borders open!

We ventured into Florence city center twice during our stay, once with the complimentary shuttle of the hotel and once by taxi.  I have been in Florence during this period several times, and normally it is not teeming with Americans, and in fact there were very few tourists on the streets at all.  Locally, in the city center, hotels are running about 15% occupancy, but forecasting to drop down to 5% by then end of October.  Outside the city, the resort hotels have had a much better than expected season as Europeans from France to Germany to Scandinavia, UK have rediscovered Italy this year.  Most shops and restaurants are open.  Masks are required, but outdoors, not always worn.  Indoors, most establishments take your temperature at the door, and masks are required in restaurants until seated.  I will say that we did avoid several restaurants in Florence as they were not adhering to the mandated distancing between tables at all.  Additionally, as you will find anywhere you travel, we passed by a night club full of young people inside and on the street outside, none wearing masks. 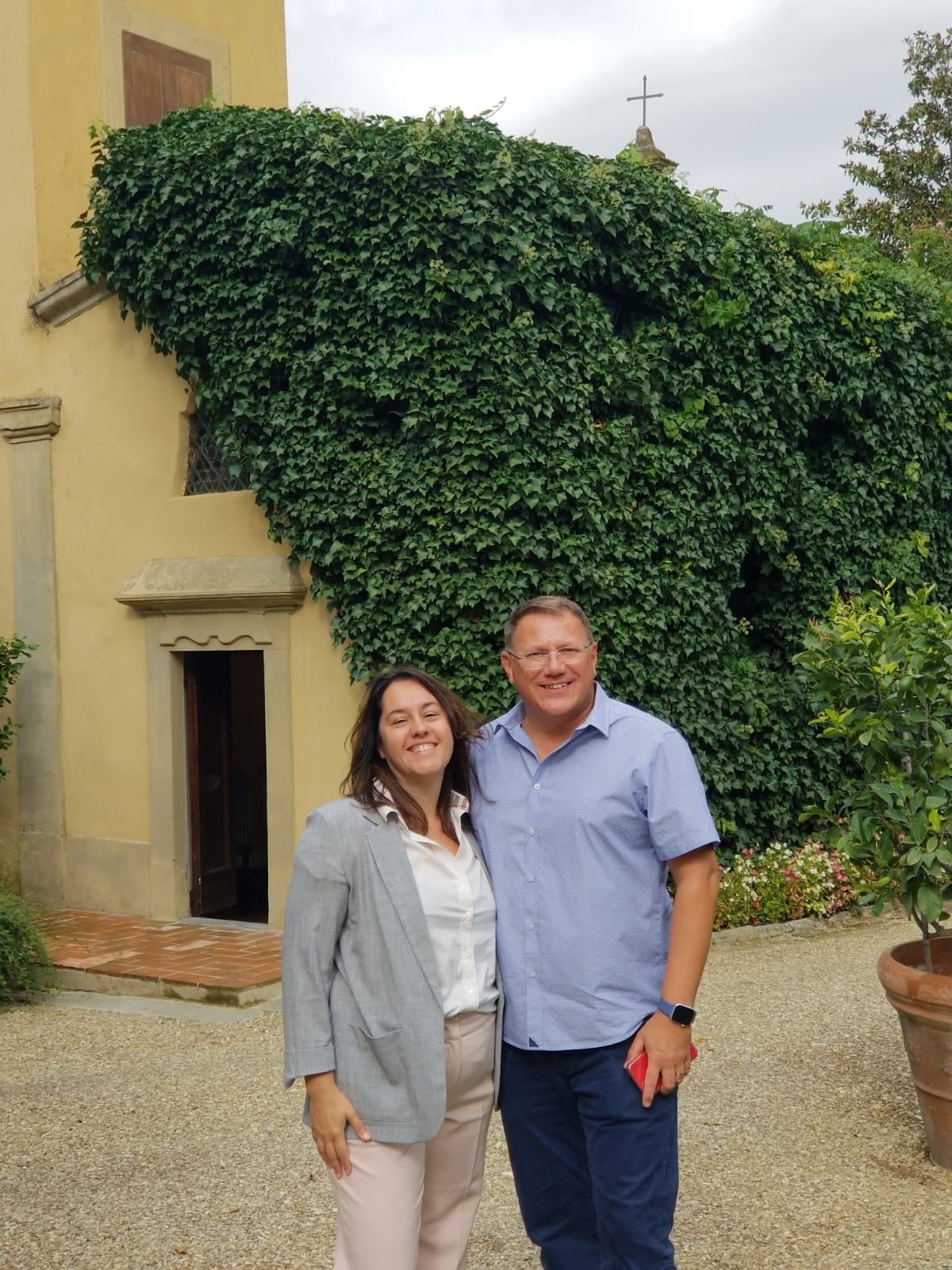 It shocked me more that it does in America because Italy was so ravaged by the virus, and the lockdown was much stricter and long than what we in America endured.  Overall, it was a very remarkable experience to see old friends and walk the streets of one of the worlds beloved cities, mostly amongst the locals.  It was clear that the Florentines were very happy to be moving about again, but from the discussion we had, they are very much struggling having no view of tourism returning until next spring.

There are so many things to say about Villa d’Este, but the name alone speaks volumes.  If the walls of this truly historic site could speak, the stories would be endless, fascinating, and in some cases probably shocking and humorous.  What hits you every time you pull into the driveway and up to the front door of this iconic hotel, is that you have no doubt you have arrived somewhere very special and very unique.  It is the second home of those of understated wealth, celebrities, and nobility from around the world. So, not only do the walls have stories, but also do those they currently surround.  Yet, there is a normalcy about this amongst the staff that is like nowhere else.  We had the double pleasure of being greeting and hosted for lunch at La Veranda by the famous Mr. Danilo Zucchetti and our great supporter, colleague, and friend to many of you in the industry, Gregory Bradelle.  Afterward, they both showed us a few secrets of the hotel we had never seen or know, and will keep in our back pocket for your clients.  Mr. Zucchetti then arranged for us to see the spectacular shores of the lake by private boat. 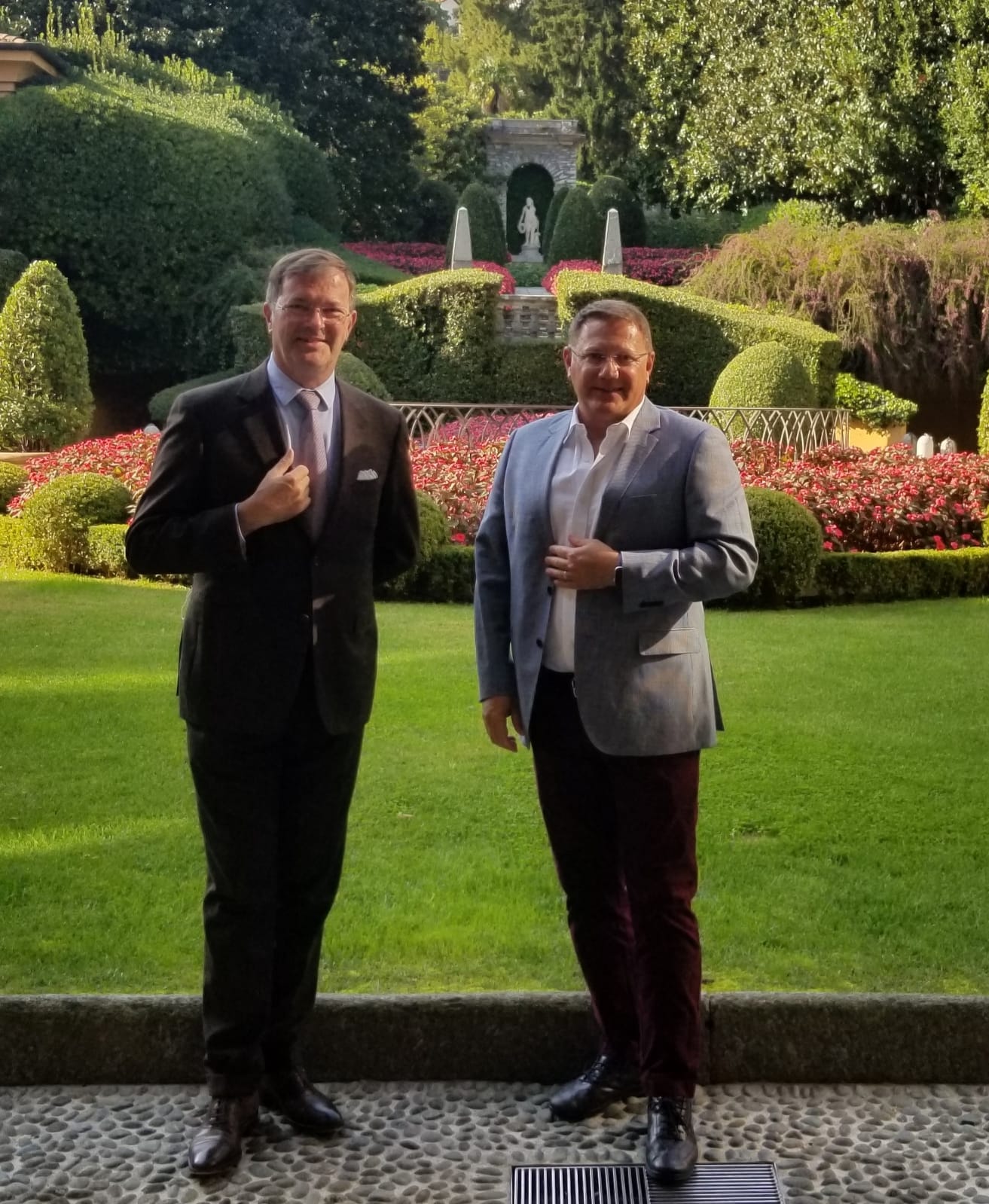 This is only way to see and understand the beauty and capture the feeling of the amazing residences around the lake.  It also made me understand a new way to see the grandeur of Villa d’Este as we came closer and closer on our return.  I could go on and on, but it’s all in the history, details, and the warmness of the highly professional staff that make this icon live on.  We were unfortunately there only 24 hours, so we never had any reason to leave the property, but as we never dreamed we would make it back this year, why would we!? 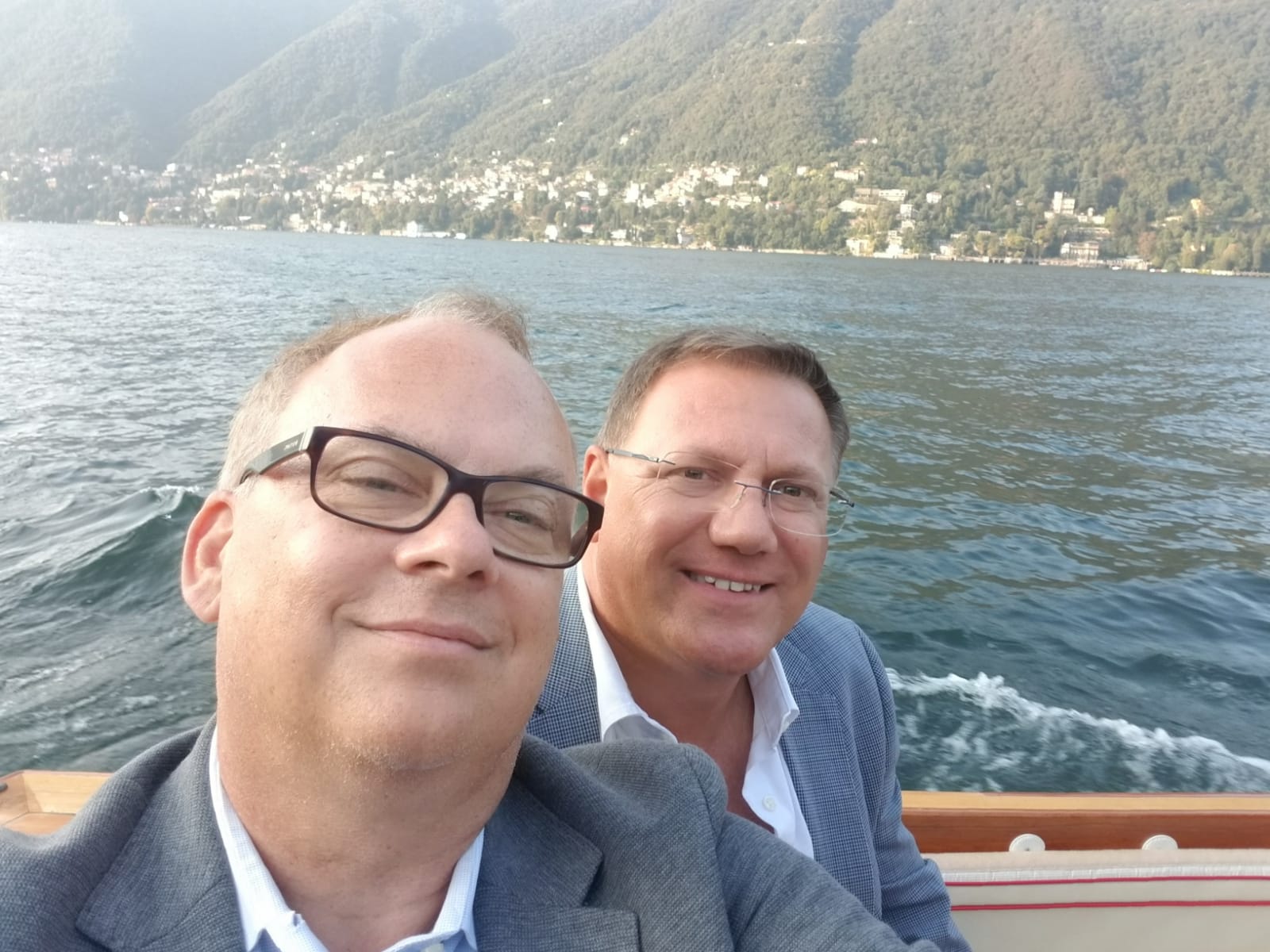